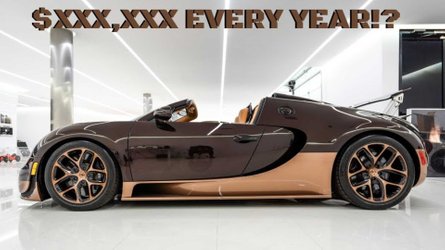 Businessman Manny Khoshbin owns 0.44% of all Veyrons ever built as the real estate mogul has two W16 monsters out of a total of 450 made by Bugatti throughout the vehicle’s lengthy 10-year life cycle. If you’ve seen some of his videos, he actually drives his cars on a regular basis without worrying about how each and every mile on the odometer could have a negative impact on value. He has a soft spot for Mercedes SLR McLarens (five in his garage!), but his latest video is about one of the two Veyrons.

A car that has a starting price with seven figures always has extremely high upkeep costs, but how much will maintaining a Veyron in tiptop shape is actually going to set you back? Well, Manny says Bugatti recommends all fluids have to be changed each year and that costs a hefty $25,000 since replacing the oil and all the other fluids takes a lot of work.

The car has a whopping 16 drain plugs or twice as many compared to another exotic yet much more affordable performance vehicle from the VW Group, the Lamborghini Huracan. The drain plugs are not easily accessible as the mechanics have to take out the rear wheels and brakes, as well as the lining on the rear fenders along with the one underneath the back of the car.

Moving on to the wheels, Bugatti advises all Veyron owners to change the tires once every couple of years and a fresh new set costs an eye-watering $38,000. As for the wheels themselves, they have to be replaced every 10,000 miles (16,093 kilometers) for a staggering $50,000.  Doing the math, we’re looking at around $100,000 in maintenance costs in just a couple of years of ownership.

Manny has two Veyrons and a one-off Chiron Hermes on the way so the bills are even higher, but a tire set for the newer hypercar is “only” going to be $8,000. He’s also thinking about selling the Mansory Veyron at some point, probably to make room in the garage for something just as extravagant. Future additions to the lineup include a Mercedes-AMG One, McLaren Speedtail, Ford GT, Porsche 935, and a Koenigsegg Jesko.

The insane costs of maintaining a Veyron were revealed about a year ago when an EPA certification application surfaced the Internet, showing $6,400 to replace each individual turbocharger and approximately $9,000 in labor costs to replace a pair. An air cooler is $9,000 and there are two of them, while labor for each is another $2,000. The camshaft adjusters might only be about $800 per piece, but an owner has to pay around $21,000 in labor costs since the procedure requires some engine disassembly.